There is a huge part of me that loves Jerry Lewis, Dean Martin, cabarets, crooners and all the glitz and glamour of Las Vegas. It was my parent’s heyday when those two iconic stars rose to fame and the “Rat Pack” reigned supreme. By the time I was switched on to this resonating wave of comedic influence it was the 1970’s and Elvis and Las Vegas were synonymous – and of course, I loved Elvis too.

I was tickled pink to have the chance to meet Tony Lewis recently and discover that the magic of Martin and Lewis lives on.

To begin this story I would like to take you back in history to retrace a couple of key events.

WW2 officially ended on the 2 September,1945 and by Boxing Day the next year Benjamin “Bugsy” Siegel’s iconic Flamingo Hotel had opened for business, paving the way for the future direction of Las Vegas.

The times were buzzing with high voltage energy. Explosions of talent rose to feed a war-torn world starving for positivity, creative expression and a fresh brand of humour, and on July 25, 1946 Dean Martin and Jerry Lewis teamed up to launch their comedy duo in Atlantic City’s 500 Club,  triggering a powerfully transformative wave of hope and enthusiasm. Their humour tapped into a sense of innocence, romance and cheeky bravado that helped re-align the shattered psyche of a world seemingly hell bent on destruction for “the greater good” … and that’s no mean feat!

Now, flash forward 68 years and the world has produced two of the greatest tribute performers in Tony Lewis and Tom Stevens whose Martin and Lewis Tribute Show is offering a window and a fresh view into those dynamic times.

For 29 years comedian, writer and actor Tony Lewis has been delighting Australian audiences with engaging and diverse cabaret style shows. With a repertoire consisting of over 70 voices and characters he pays tribute to the greats such as Elvis Presley, Tom Jones and Neil Diamond to name a few. But it is his uncanny resemblance to Jerry Lewis that makes him the quintessential Jerry Lewis tribute artist. To quote Tony “I have a mind like a zerox machine”.

On the other side of the world American comedian, writer and actor Tom Stevens has been a successful cabaret performer for 30 years, with over 500 live Dean Martin Tribute performances in Las Vegas over the last 11 years alone. He is undoubtedly  “The best Dean Martin tribute artist ever”.

You can imagine how these guys felt when they finally saw each others’ acts via cyberspace last year!  Together they have created  the greatest Martin and Lewis Tribute Show of all time and it is playing to sell out  audiences in LAS VEGAS.

They re-create much loved original Martin and Lewis skits from the 40”s and 50′s as well as successfully weaving their own written material and contemporary themes into the original comedic formula created by Lewis and Martin. The positive vibe and success of their shows have built a momentum that is growing with every performance.

Die hard fans and the uninitiated alike can enjoy the DVD of the recent Martin and Lewis Tribute Show telecast in early October 2013 before a live audience hosted by Las Vegas Rocks on the Tony Sacca Show.

The Martin and Lewis Tribute Show debuted in Australia last October leading to sell out live and telecast shows in Las Vegas. There is talk of a return Aussie tour in 2014, so stay tuned …

To find out more about Tony Lewis and his amazing career past, present and future, and to catch the tail end of his 2013 Australian tour dates check out https://www.facebook.com/tony.lewis.946

Melbourne readers: absolutely do not miss out on joining the incredibly talented and funny Tony Lewis for his final show of 2013, in his home town of Melbourne. Performing live at the Thornbury Theatre on the 29 November.

I’ll leave you with a couple of quotes from the great Jerry Lewis himself:

“I get paid for what most kids get punished for.”

“When I was a kid I said to my Father one afternoon, Will you take me to the zoo? He answered, If the zoo wants you, let them come and get you.” 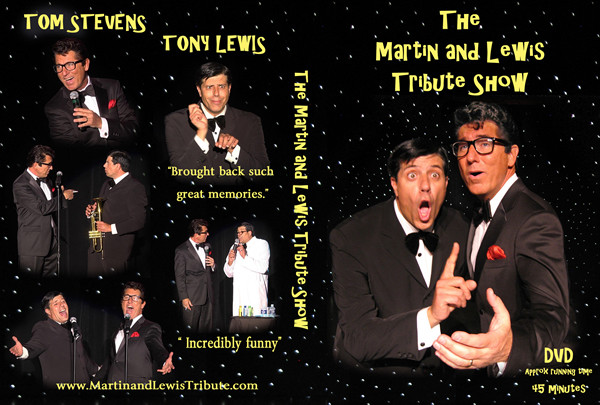